An Acquaintance (Who Could Be A Friend) Sent Me An Emoji

“In what universe is this Emoji sad?”*

“Oh, quite.” I quickly assent.

And then my brain poured out to him, the one who tested me,

Or rather like a black Reinhardt canvas, or a Rorschach test,

I laid it out for he,

With all the testimony I could make be

I am good at coping,

But I am profoundly sad too.

I continue, not caring what he will do,

For we just met.)

And I have been having some revelations, but with pain too,

The smile is not happiness alone.

I am very reluctant to talk about my own sadness. Its intensity would kill.

So I have a sort of Treaty with it. A very longstanding, painstakingly created Treaty.

Clauses abound in this gargantuan agreement; many are bent in favor of one party or the other.

He doesn’t understand. He can’t understand. He’s 22, yet he’s barely a even a boy, let alone a man. Coddled, an only child, he will retreat to his mother’s large nest for the winter (this is real!), he writes back something trite about hope, and how he doesn’t have sadness, but melancholy (an affectation of the upper-class; or does he mean ennui?) and he couldn’t be sad, because he had hope,

I can and cannot hope for more or less. This specimen is produced by an unthinking, self-generated, auto-enchanted onanistic, Möbius strip of bourgeois élan,

Response is minimal, but thus:

“When you’ve been abandoned by father, mother and adoptive grandparents, all between 0-17

And told again and again you’re a failure, despite working tirelessly toward success,

You’ll understand the words I say,

When I say my sadness and I coexist.”

It turns out the Emoji is sad, and he declares an ‘inner innocence.’

What quick learning and teaching we must do. For Generation Z is truly the End. 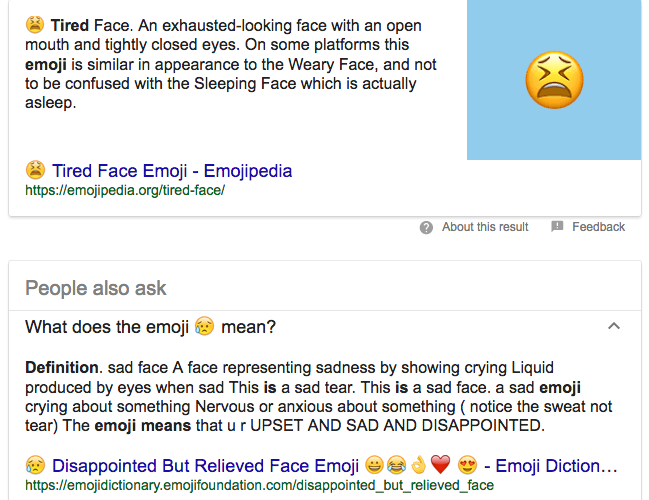 *Bottom emoji is sadness (the one used that started the above text) / Tiredness is a different emoji, contrary to the potential friend.