“No claims about humor or creative license can ever make it okay. Blackface is part of a history of dehumanization, of denied citizenship, and of efforts to excuse and justify state violence. From lynchings to mass incarceration, whites have utilized blackface (and the resulting dehumanization) as part of its moral and legal justification for violence. It is time to stop with the dismissive arguments those that describe these offensive acts as pranks, ignorance and youthful indiscretions. Blackface is never a neutral form of entertainment, but an incredibly loaded site for the production of damaging stereotypes…the same stereotypes that undergird individual and state violence, American racism, and a centuries worth of injustice.”

Black bodies are not conduits or outfits to be worn to release embers from white artists’ troubled psyches. White artists painting themselves black are committing an act of serious violence and insensitivity while embedding themselves in the long sordid history of blackface and minstrel acts. Black skin is not an outfit to be worn, and there is nothing artistic or interesting about painting white skin black. Unfortunately, from Kim Lee to Kle Mens Stępniewska, Polish artistic milieus seem completely disinterested with the suffering of Black people, for they have no problem playing the mimetic minstrelsy.

Coming across these disturbing images, depicting Kle Mens as some mimetic Black Madonna of Częstochowa, I knew that I needed to reach out to the artist immediately. I found Kle Mens, as we were connected via Facebook, and sent her a message. Understandably, her English isn’t sufficient to discuss the nuances of the history of blackface, so I contacted her curator, Elaine Tam. We spoke for nearly an hour. The full transcript of that conversation will be published shortly. Suffice it to say, the conversation did not assuage my concerns. In fact, Tam’s prevarications that Kle Mens’ work is somehow not racist, because of its local context, its autobiographical nature, its ostensibly feminist rebellion against the iconography of the Catholic Church did not move me. These are three main defenses formally given for the presentation of this work.

Addressing these three theses, I intend to highlight the already incredibly (visible) racism in Kle Mens’ work. Firstly, whilst Poland has a long and complicated history, which is definitely distinct from Western Europe’s colonialism, slavery and genocide of African people, Poland is a part of a globalized world. Globalization, the Internet and other means of information dissemination (e.g. artists do travel), is by no means the only way Poland is latched into the Euro-American histories highlighted above. Poland is a member of the European Union, a federation of some of the wealthiest nations on the planet; where does the wealth of Britain, France, Spain, Portugal, Germany, the Netherlands and Belgium primarily come from? Centuries of ruthless exploitation of Africa via slave trading, the use of slave labor, colonial administration of sovereign African lands, mass land expropriations, and genocide.

Remi Adekoya reports in The Guardian,

“[Poland] received £56bn in [EU] development funds between 2007 and 2013, money that was used to build hundreds of kilometres of highways and express roads as well as youth sports facilities, modern sewerage systems, kindergartens and pre-schools.

Add to that the £60bn earmarked for Warsaw in the EU’s 2014-20 budget and the country will have enjoyed a windfall equivalent to roughly double the value of the Marshall Plan, calculated in today’s dollar figures. And that does not take into account the tens of billions of pounds that Polish farmers continue to receive in agricultural subsidies from Brussels. What we are witnessing is, without doubt, one of the largest wealth transfers between nations in modern history.”

Needless to say, no such reparations to Africa, or the descendants of African slaves in the diaspora, has yet been forthcoming. Notably, white nationalism is also on the rise in Poland, with far-right groups using Poland as a place to form pan-European coalitions to protect an imaginary ‘white Europe.’ Poland is not isolated in terms of white nationalism, in fact, it is near the epicenter.

“In Poland, last weekend’s independence day celebrations mutated into perhaps the ugliest international congregation of the extreme right seen in Europe in recent times. The grotesque procession of militant nationalists, white supremacists, and radical Islamophobes included Poland’s National-Radical Camp, the National Movement, and the All Polish Youth, as well as the deputy chairperson of Jobbik, Hungary’s most xenophobic party. These groups and others who attended trace their ideas back to anti-Semitic, sometimes-fascist movements popular before World War II. Like their forebears, they won’t rule out the use of violence.

The march cast a disturbing light on the militant and radical currents coursing through Europe’s ever-more successful nationalist parties, for whom Hungary’s governing Fidesz party is a model. Its members include Poland’s ruling Law and Justice (PiS) party, Alternative for Germany, and the Austrian Freedom Party, among many others.”

Poland’s white nationalists eagerly form international coalitions with British, German, Hungarian, Italian and Scandinavian neo-fascists. Their unity was on display at the Independence Day march, where I too reported from. Whether selling toothpaste in Asia or art, the appropriation of Black skin by white and non-Black artists is unacceptable, vile and vicious. Blackface represents, normalizes and reinforces the ongoing, relentless exploitation of Africans. White European artists painting themselves black are not creative; there is nothing creative about a centuries-old tradition of wearing Black skin as a commercialized outfit. Kle Mens’ kitsch Madonna minstrel mimicry speaks not against the Catholic Church and the repression of women, but on behalf of the exploitation of Africans; it is nothing more than a cheap, disgusting gimmick. The racist content of blackface does not become removed when it crosses the Oder-Neisse line. Rather, the use of blackface in Europe makes the artist’s ostensible ‘feminist’ performance hollowed out, shallow and lacking reflexive subjectivity.

Kle Mens is not an isolated, provincial Polish artist. She has traveled; she knows US culture. She’s been to the US. Standing upon colonized land in the US desert southwest, in the picture above, the artist poses as a “cowboy,” hands in the position of a gun. Of course, this Polish John Wayne could be counted as ‘undermining’ gender norms, she’s cross-dressing as a cowboy, and perhaps we are meant to take this as a joke? She’s just ‘performing,’ it’s just ‘art,’ and ‘her body is her canvas’ (Elaine Tam)? Dare I say, no. The historian Eric Hobsbawm extracting from his book for The Guardian in an article called ‘The Myth of the Cowboy,’ states,

“[T]he cowboy also represented a more dangerous ideal: the defense of the native Waspish American ways against the millions of encroaching immigrants from [so-called] lower races. Hence the quiet dropping of the Mexican, Indian and black elements, which still appear in the original non-ideological westerns – for instance, Buffalo Bill’s show. It is at this stage and in this manner that the cowboy becomes the lanky, tall Aryan. In other words, the invented cowboy tradition is part of the rise of both segregation and anti-immigrant racism; this is a dangerous heritage. The Aryan cowboy is not, of course, entirely mythical. Probably the percentage of Mexicans, Indians and black people did diminish as the wild west ceased to be essentially a south-western, even a Texan, phenomenon, and at the peak of the boom it extended into areas like Montana, Wyoming and the Dakotas. In the later periods of the cattle boom the cowboys were also joined by a fair number of European dudes, mainly Englishmen, with eastern-bred college-men following them.”

And so it is. Yes, millions of Native Americans were killed by white settlers moving west. What a wild time. She could have Googled it, information is everywhere,

“From the colonial period of the early 1500s through the twentieth century, the indigenous peoples of the Americas have experienced massacres, torture, terror, sexual abuse, systematic military occupations, removals of Indigenous peoples from their ancestral territories, forced removal of Native American children to military-like boarding schools, allotment, and a policy of termination.[20] Historians and scholars whose work has examined this history in the context of genocide have included historian David Stannard[21] and anthropological demographer Russell Thornton,[22] as well as scholar activists such as Vine Deloria, Jr., Russell Means and Ward Churchill. Stannard compares the events of colonization in the Americas with the definition of genocide in the 1948 UN convention, and writes that “In light of the U.N. language—even putting aside some of its looser constructions—it is impossible to know what transpired in the Americas during the sixteenth, seventeenth, eighteenth, and nineteenth centuries and not conclude that it was genocide”.[23] Thornton describes as genocide the direct impact of warfare, violence and massacres, many of which had the effect of wiping out entire ethnic groups.[24]  Native American Studies professor Roxanne Dunbar-Ortiz says, “Proponents of the default position emphasize attrition by disease despite other causes equally deadly, if not more so. In doing so they refuse to accept that the colonization of America was genocidal by plan, not simply the tragic fate of populations lacking immunity to disease. In the case of the Jewish Holocaust, no one denies that more Jews died of starvation, overwork, and disease under Nazi incarceration than died in gas ovens, yet the acts of creating and maintaining the conditions that led to those deaths clearly constitute genocide.”[26]

By 1900 the indigenous population in the Americas declined by more than 80%, and by as much as 98% in some areas. The effects of diseases such as smallpox, measles and cholera during the first century of colonialism contributed greatly to the death toll, while violence, displacement and warfare by colonizers against the Indians contributed to the death toll in subsequent centuries.[27] As detailed in American Philosophy: From Wounded Knee to the Present, “It is also apparent that the shared history of the hemisphere is one framed by the dual tragedies of genocide and slavery, both of which are part of the legacy of the European invasions of the past 500 years. Indigenous people north and south were displaced, died of disease, and were killed by Europeans through slavery, rape and war. In 1491, about 145 million people lived in the western hemisphere. By 1691, the population of indigenous Americans had declined by 90-95 percent, or by around 130 million people.”[28]

But who cares for the facts when it gets in the way of a good photo-op?

None of this is ironic, none of it is critique, none of it is art. It’s privilege among an incarnadine background, where hundreds of thousands, millions, of slaughtered Native Americans are buried. So I reject that the artist is not ‘intentionally’ racist; she’s a self-identified “Post-$oviet girl,” a member of the arising and aspiring post-1989 urban Polish petit bourgeois. Celebrating genocide at every level, from blackface to cowboys and ‘Wild West’ poses on colonized lands, Kle Mens is a truly detestable, yet ersatz fashionable brand. Is it any wonder that far-right, white nationalism(s) are on the rise when this is meant to be ‘subversive’ and ‘avant-garde’ work, nothing less than ‘feminist art?’ 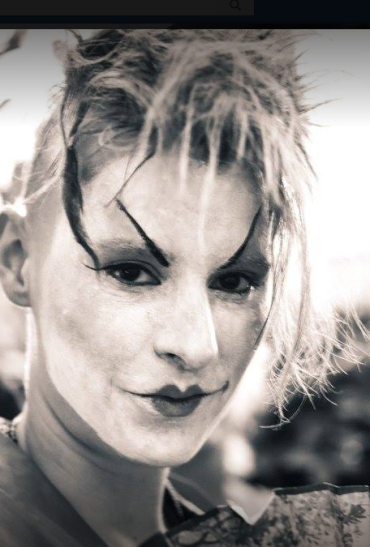 I think these images speak for themselves. As for Kle Mens upcoming exhibition, “Blessed in Blackness”, meant to open tomorrow, at BWA Zielona Góra in Zielona Góra, Poland, we can see her oeuvre reaches ever greater heights of racism. The defense made by her curator, Elaine Tam, is insufficient at best.

Art is not a playground for white people to demean, desecrate and deny Black and non-white life.

(Apparently, Kle Mens may have a deal with the Lyles & King Gallery in New York City. Perhaps they should hear from the voices of the people that Kle Mens ‘plays?’)