A (Very) Queer Dispatch From Warsaw

After interviewing an LGBTQ activist from Razem, a left-wing, dynamic and growing political force in Poland, I left Kafka Cafe and headed down Ulica Nowy Świat, one of Warsaw’s main historic streets. Bypassing tourists, shops, a Starbucks filled with Poles wearing nationalist symbols, I followed a group of men carrying a large Polish flag, with Polish flag armbands, to Rondo Charles De Gaulle. In the center of this roundabout (‘Rondo’) stands The Warsaw Palm Tree, an “art installation … created by artist Joanna Rajkowska in 2002 as an homage to members of the Jewish community who once lived in this area.” It is here that I stopped and took the following photograph.

Asking a man who looked like a middle-class journalist (expensive camera, etc), “where can I speak to the far-right,” he said “it’s all around.” He then proceeded to say “I am considered on the far-right, what is the far-right?” Asking him what he stood for politically, he looked bemused, “What do you think? I am not against all immigrants, of course, but only the Islamic ones, they want to take over Europe, they will not assimilate … Poland is a Christian nation. They want to take over all of Europe.” Deciding that nothing more could be gained from this conversation,  I politely said I would be moving on. “Oh, you must come to the speeches at the National Stadium, this is a great event, lots of speeches.”

I nodded politely, and began walking west, toward the march, and attempting to find my friend, and sometimes translator, Bartek Droździak at the counter-demonstration. Coming into wave after wave of predominantly younger men, some older women and very few younger women, all dressed with Polish armbands, I noticed several contingents dressed in military uniforms, with groupings based on age. Marching to the tune of far-right nationalism, in full military uniform, stood young men from their early 20s into their middle teens. Pyrotechnics, or flash-bangs, of white and red explosions began going off everywhere. Sounding like gun fire, with smoke blanketing the air, the clouds above seemed a bit darker (the sun was indeed going down), and it began to rain slightly. Waves of marchers, some of them with young children, proudly took part in this spectacle of white nationalism. I have never seen anything like.

Fumbling through the crowd, I came across my friend and sometimes translator, also lost because of police barricades, Wiktor Hys.  Asking me, what are you doing here! I responded: I am lost but this is something to see! He agreed, yet their was an implicit understanding between us: this is not safe.  Approaching, I could see some green flags, Wiktor clarified these belonged to “the hardest right group, Obóz Narodowo-Radykalny, ONR, or National Radical Camp.”

Various media, outside of Poland, would later report that “On 11 November 2017, 60,000 people marched in an Independence Day celebration procession organized by the ONR,[16][17] chanting ‘fatherland’ and carrying banners that read ‘White Europe’, ‘Europe Will Be White’, ‘Clean Blood’, and ‘Pray for Islamic Holocaust’.”  The centrality of such an openly fascist group in organizing the 11/11 Independence Day march belies the statements by its apologists and supporters, including the those disseminated via TVP (Polish State Television) and the ruling far-right Law and Justice (PiS) government, that this was simply a “beautiful” march of “patriots.”

When I first came to Poland, my first commission as a writer came from Vice magazine; in that original article, published in June of this year, I cited Christopher Isherwood’s time in Berlin as a comparison. Realizing now just how appropriate that comparison is, living in a capitol city: dynamic, thriving with a large LGBTQ scene under a far-right government, with a massive fascist movement growing all around, I am stunned. “History doesn’t repeat itself, but it often rhymes,” opined the great Mark Twain, or so John Robert Colombo’s poem says.

Interestingly, “The ONR considers itself an ideological descendant of the antisemitic political movement which existed before World War II, sharing the same name.[4][5]” So yes, there are indeed, separated by time, rhymes of rhetorical fascism, usages of names past, alliances with forces responsible for so much evil and destruction, and those rhymes blasted onto the streets in red and white glory for all to see. Marching caricatures of hatreds held, perhaps against themselves and projected onto imaginary others, for there are virtually no Jews in Poland, nor Muslim immigrants, and LGBTQ people are forced into closets, or wardrobes, mouths clogged with the red and white flag of Poland and jammed with the cross of the Catholic Church. Former Polish MP and transgender woman, Anna Grodzka, who I’ve interviewed several times, recounts how she kept “a pile of women’s things” behind her wardrobes in her teens and twenties, “this secret space was my second life” she said via our translator, Dot Dobosz. This is Poland. And the situation is deteriorating under the ruling Law and Justice government.

Pressing on, Wiktor and I, attempting to meet our friends and join the counter-demonstration, headed past a line of men urinating on the gates and walls of Poland’s National Museum of Art. Supposing art as decadence, fascists rarely see any value in it, and I suppose this line of pissing, was directed or coordinated, as there were other places to relieve the bladders of these brave storm-troopers against invasions of the imaginary Islamic caliphate. We weaved and bobbed through wave after wave of marchers chanting “Poland for the Polish,” “Immigrants Out,” “Catholic Poland” among some drunken ditties, crossing a park where a very thin, pale boy of 13 or 14 tried to pass me a ticket. I looked at Wiktor, he said, “oh, those are tickets to visit the airplanes.” And we entered another layer of this dystopia. Lines of children with their mothers, young women primarily, waiting to get to see war planes from the past. Teenagers dressed as soldiers. The women looking tired, drained and not enthusiastic, attending an obligatory event in the capitol city, as their husbands marched to the National Stadium. The entire scene was tragic and kitsch.

Finally arriving at the counter-demonstration, less than a kilometer away, I observed the increasingly militarized police presence. Wiktor made some jokes about the different personalities and classes of police based on the weapon they carried. Armed with guns, grenades and other items for wounding, the police presence differed greatly from the hands-off approach that allowed pyrotechnics and mass public urination, alongside hate speech and property destruction of the fascist march. Bringing into stark relief the government’s differing responses, bands of heavily armed police tightly encircled this small group of socialists, liberal democrats, anarchists, feminists and LGBTQ demonstrators. Here I met with Tomasz Puła, organizer of the Queer Solidarity contingent, in the middle of a group of people. They are all listening as information comes in and out of the group frantically. “People have been arrested” Tomasz says. They are marching to the police station. I find Bartek Droździak, pay him for his translation services, walk on with him until it looks like the police are ready to arrest everyone. We might get a drink, but it’s too early and too late. I head home, exhausted and stunned.

“Warsaw, first of all I want you to know I love you, and that we have work to do. Today I saw perhaps more than 100,000 neo-fascists march through your streets, pissing on your National Museum of Art’s walls and gates, using pyrotechnics, engaging in xenophobic chants, etc. There is a serious Nazi/fascist problem in Poland. We need to address it. You are a beautiful and power Space. I know, as with so many other occupations by cruel idiots, you will find a way.

May the Mermaid of Warsaw, in her divine guidance, bless the city with love. & remove out those who cannot love. Open the city to love, to the cosmos, to those that will love you too, like me, Warsaw.”

I posted the above text with an image of the mermaid sculpted by Jan Woydyga which was erected on the Stanislaw Markiewicz viaduct in Karowa Street in 1905. 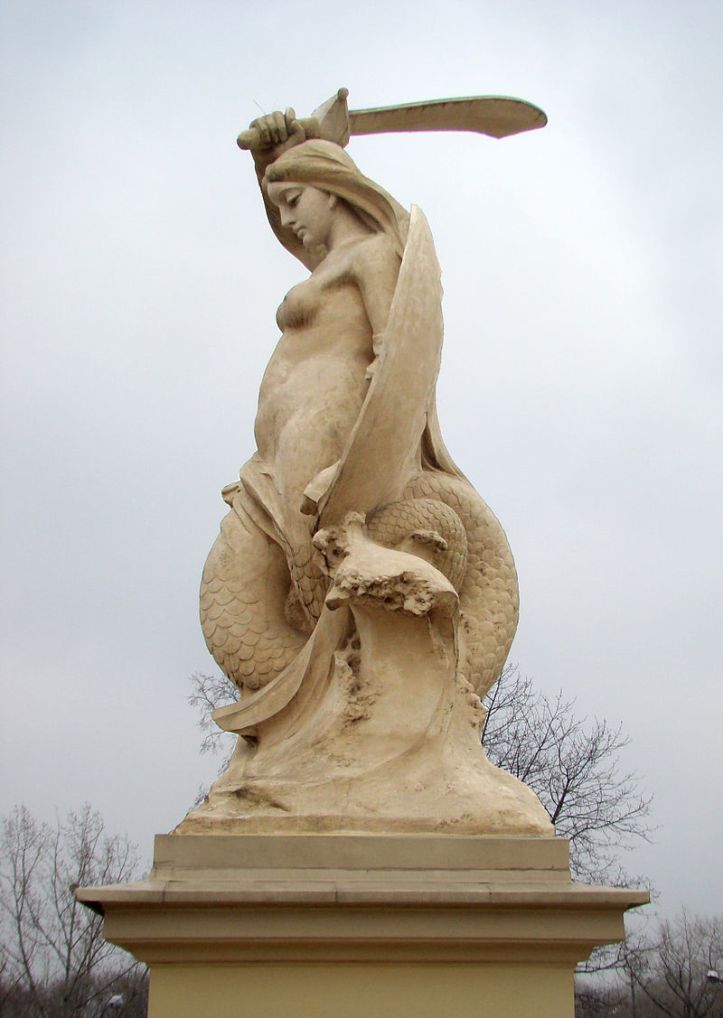